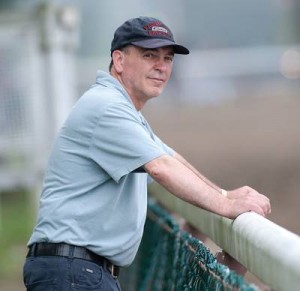 Photo by Tod Marks, for thisishorseracing.com

It’s very rewarding, said Jacobson. What more can I say? I’m very fortunate to be here and have my horses run as well as they are. It’s an honor to be mentioned in the same breath as Todd Pletcher. This isn’t supposed to happenÓwe’re a claiming outfit, mostly, so we’re supposed to do well at Aqueduct, not at Belmont during the spring and summer. But this gives our whole outfit momentum going into Saratoga.

Jacobson, a son of trainer Howard ÏBuddy Jacobson, trained from 1976-82 and returned to the sport in 2007. He has won six New York Racing Association meet titles and finished 2012 tied atop the leader board with 110 wins at Aqueduct Racetrack, Belmont Park, and Saratoga Race Course.

It’s been all about putting the whole package together; it’s not any one thing, said Jacobson. ÏI have my brother (Doug) working with me, and he has been claiming good horses every day. I have the best owners anybody can have who allow me to run my horses where I believe they should run and win. I’m fortunate enough to have riders like David Cohen, Joel Rosario, and the other really good jockeys ride for me, and they ride hard. And my staff is the key, Paul Wilson, Frank LaBoccetta, the list goes on.

In 2007, Gary Contessa came close to matching Pletcher when he sent out 39 winners during the spring/summer meet.

The Inside Track on Horse Racing: Part 4

Why Does My Performance Horse Have a Weak Top Line?