Body Condition Broodmares should be fed as much forage (pasture and/or hay) as possible along with the minimum amount of grain needed to maintain their body condition at a moderate level.  A basic guideline for proper broodmare nutrition and body condition management is to feed her enough so that you cannot easily see the ribs, but you can easily feel the ribs when slight fingertip pressure is applied to the middle of the mare’s ribcage.  This would correspond to a body condition score of 5 using the popular body condition scoring system illustrated in table 1.  If you are going to error on your mare’s body condition it is better to error slightly to the heavy side compared to the thin side.  However, it is very important to realize that if an individual mare is going to be a bit over conditioned there is a difference between allowing a mare to be a bit heavy because she is an easy keeper and remains fleshy on a diet of forage only compared to a mare that is fleshy because she is receiving more grain than she requires to maintain a moderate body condition. In summary:

Approximate nutrient requirements of 1100 pound mares during the first and second half of gestation and during lactation are listed in table 2.  As illustrated in table 2, with the exception of vitamins A and E nutrient requirements of non-lactating mares prior to the second trimester of gestation are no different from those of mares at maintenance.  Mares at this stage of production can usually obtain all the protein and energy they require from good quality pasture and/or hay as illustrated in figure 1.  However, depending upon the mineral content of the forage, mares will usually be quite deficient in zinc, copper, selenium, vitamin A and vitamin E.  The basic question in this situation is how to provide the mare with enough supplemental minerals and vitamins without providing excessive amounts of energy and protein.  The most feasible way to accomplish this is to provide a feed or supplement high in minerals and vitamins, but low in protein and energy.

Many people are of the understanding that mares in the second half of gestation require much more protein and energy than mares at maintenance or in the first half of gestation.  However, as illustrated in table 2 the nutrient requirements that increase the most are calcium and phosphorus not protein and energy.  While mares do require slightly more protein and energy during the second half of gestation, they are still able to obtain enough protein and energy from good quality forage in most cases as illustrated in figure 2.  However, their intake of minerals and critical vitamins becomes more deficient if they are not properly supplemented.  This deficiency is not as critical for the mare as it is for the developing fetus.  In fact, chances are you would not be able to tell that the mare was suffering from a deficiency simply by her visual appearance.  Since she is receiving adequate quantities of protein and energy, her body condition should remain adequate.  The largest problem encountered under these circumstances is the foal being born weak and very susceptible to structural and health disorders.  Therefore, during the second half of gestation, it becomes extremely important for the mare to receive supplemental minerals and vitamins in a form that does not cause her to become over conditioned.

Due to the fact that protein and energy requirements increase substantially upon lactation, the mare is most often fed greater quantities of a grain mix and/or a different grain mix altogether.  Since the mare is undergoing a fair amount of stress at the time of foaling, it is advisable to make the change in her ration before she foals.  However, care should be taken not to overfeed the mare during gestation.  Grain intake levels should follow the mare’s milk production as closely as possible.  Mare’s milk production usually reaches maximum levels approximately 6 to 8 weeks into lactation, this is the time when she should receive the greatest amount of grain.  From a practical standpoint, simply feed enough grain to maintain a moderate body condition while realizing that you should be increasing the grain intake up to 8 weeks of lactation and then gradually reduce the grain intake following peak lactation in order to prevent the mare from becoming over-conditioned.

Due to the fact that calcium and phosphorus intakes are very important to the lactating mare, we must ensure that she is able to efficiently utilize the calcium and phosphorus she consumes.  The inclusion of fermentation enhancers can improve the availability of calcium and phosphorus in the mare’s diet which in turn may increase bone strength of the foal.  Improved mineral status of the mare usually results in improved re-breeding success rates as well. Many mares exhibit problems associated with breeding, especially with the maintenance of pregnancy within the first 60 days of gestation.  Early embryonic death loss can be associated with improper nutrition, reduced stress resistance and/or increased susceptibility to disease.  The inclusion of organice minerals in the diets of these “problem” or “no-excuse” mares has been successfully utilized to reduce problems associated with early embryonic loss.  The exact mode of action by which organic minerals improve breeding success rates in these mares is unclear at this time.  However, clinical trials have demonstrated that mares receiving organic minerals increase the number of viable embryos produced per ovulation cycle and exhibit improved health of uterine tissue.  Increases in breeding success rates from 85% to 95% on individual breeding farms with the inclusion of organic minerals into the diet of their mares at least 30 to 60 days prior to breeding is not uncommon.

The key elements to successful nutritional management of the broodmare include:

Table 2. Approximate nutrient requirements of 1100 pound mares during the first and second half of gestation and during lactation.

Figure 1. Nutrient intake of 1100 pound mares on a 100% forage diet expressed as a percent of their requirement during the first half of gestation. 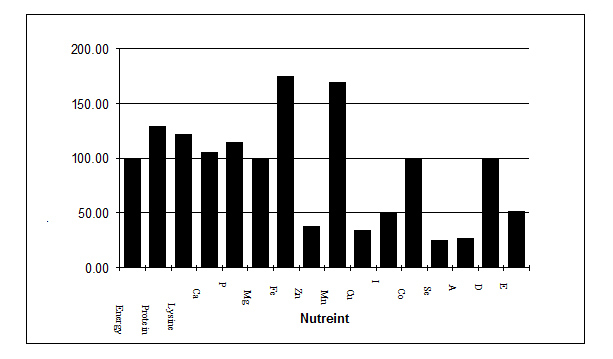 Figure 2. Approximate nutrient intake of 1100 pound mares from a 100% forage diet expressed as a percent of their requirement during the second half of gestation.