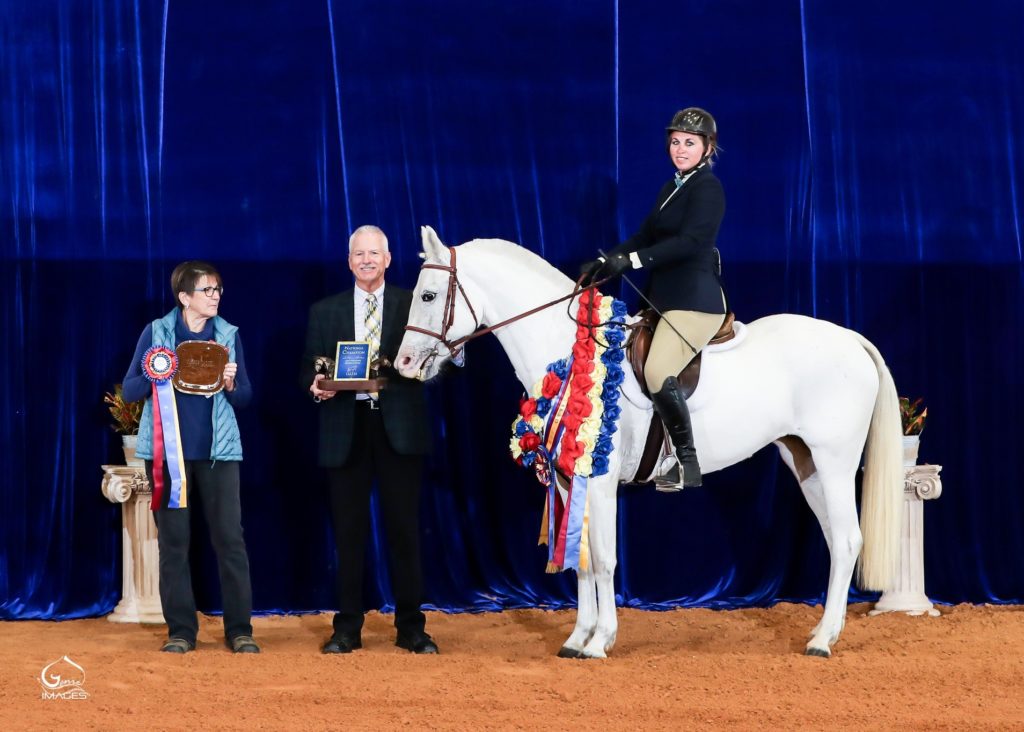 Fort Worth, Texas (January 2,2020 )- Hotty Toddy wrapped up the last decade by delivering lots of good cheer for owner Celeste Lamberth and rider/trainer Anna Reinke at the International Andalusian & Lusitano Horse Association (IALHA) 2019 National Championships in November at the Will Rogers Memorial Center in Fort Worth, Texas, winning the Half-Andalusian English Pleasure Hunt Seat Open title and – on the strength of that championship performance – the Triple Crown® Excellence Award.

It was the Andalusian/Appaloosa mare’s first show ever. “No pre-shows. Just a three-hour drive in the horse trailer to Nationals,” said Reinke, who started training the five-year-old last spring at the same Georgetown, Texas facility where she has produced prior national, world and youth champions.

Reinke said that much like her sire, Ganador RC, and dam, Hotty Toddy is one of the smartest, easiest horses she has ever known. “She’s an easy ride, works off voice commands and other than needing a little emotional support from her barn buddy, Lima, she was fine,” she explained. The buddy system at Nationals seemed to work for both horses – Reinke also showed Lima to the Purebred Andalusian Title in the Hunt Seat Open National Championship.

The Triple Crown Excellence Award is traditionally presented within the horse world to horse-and-rider partnerships that epitomize exemplary achievement and includes a keepsake tricolor ribbon, commemorative engraved plaque, and coupon for a bag of Triple Crown horse feed.

“I think my horse and I have a pretty good relationship said Reinke, who is the owner and head trainer of AREQuestrian Trainer Center and earned a Master’s degree in Equine Nutrition. “I was surprised we won the Excellence Award, but look forward to learning about Triple Crown.”

As the official feed sponsor of the U.S. Equestrian Federation, Triple Crown® Nutrition continues to recognize and support equestrians like Reinke who are passionate about their horse’s health and wellbeing. Triple Crown was the first to add prebiotics, probiotics and organic minerals to horse feed and continues to pursue excellence in equine nutrition. Learn more about Triple Crown feed on the company’s official Facebook page or Instagram @TripleCrownFeed, call (800) 451-9916, or visit www.TripleCrownFeed.com.