In January 2012, I planned a busy Combined Driving Event (CDE) schedule that would take me from Florida to Kentucky to New Jersey. Fortunately, my husband Kenny Cox agreed to join me in the adventure and serve as a navigator for a marathon. One of the many enjoyable aspects of Combined Driving is the close partnership needed with your equine and human partners to successfully complete three days of competition, including a dressage test, a marathon with up to eight difficult obstacles covering up to 17k, and a timed course of cones set a few inches wider than the carriage width.

This year I competed in three CDE divisions: Single, Pair and Four-in-Hand. Having spent years developing and training driving ponies, I was in an enviable position of having Jennifer Sims’ Morgan stallion, Declaration (aka ÏSparky), ready to move up to the Advanced level, as well as the Dartmoor ponies, that I previously competed at four World Championships, in the pony Pair division. Since each competition allows a driver to compete for only one entry, I knew the training and conditioning schedule of competing in two divisions would be challenging. The year got even more complicated when a very special pony, Fuego, a German Riding Pony, joined the barn and won my heart. 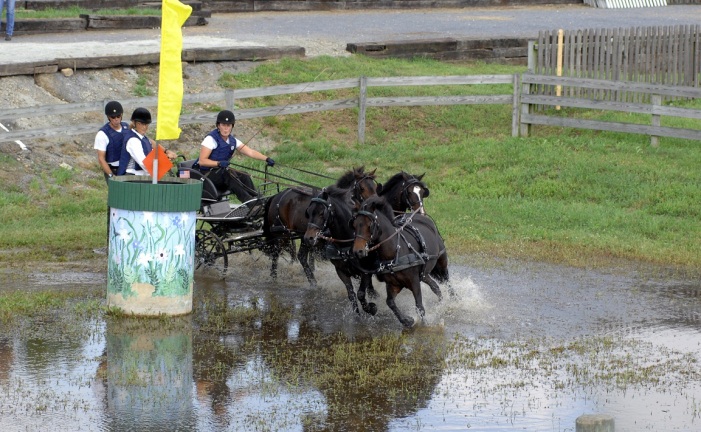 photo credit: Pic of You

Sparky is an easy stallion to work with and his trainability led us to place first in all three Florida competitions in early winter. Supple and rhythmical in dressage, agile and brave in marathon, and eager and controllable in cones, this breeding stallion was a blast to compete. Winning the Advanced single division at Black Prong, Sunshine and Little Everglades got the competition year off to a good start. Sparky is Kenny’s favorite pony because of his amazing acceleration and power during marathon.

Fuego previously competed in a pair and hadn’t competed in CDE’s for a few years. I focused on training Fuego in the dressage movements required for a single and improving his strength and fitness throughout the winter months. By late March, we entered Live Oak International at the Intermediate level, and Fuego performed well to win his division. The next competition was at Southern Pines CDE where we missed the blue ribbon by less than 1/10 of one point!

Late spring found us at home working with the Dartmoor ponies. Maude, Tabby and Coco were the experienced mares and five-year-old Valerie and seven-year-old Gwyneth were in training. It is especially helpful to have a steady and reliable pony to put with a younger pony when developing pair ponies. I think the young pony learns as much from the seasoned pony partner as they do from me! Valerie and Gwyneth progressed steadily and we made the competition year even crazier by deciding to drive the Dartmoors as a 4-in-Hand. With help from family and friends (driving a 4-in-Hand is three-person job on a daily basis), I learned how to adjust for the added length of the turnoutÓ planning ahead, keeping four reins organized, and moving my hands fast enough to change direction of the leaders before the wheelers.. When it works well, it is a tremendous feeling to have four ponies working in unison under fine control by voice and rein. The challenge of driving a 4-in-Hand is knowing that there will be moments that don’t go as planned and learning to deal with the unexpected. Trust and co-operation were put to the test when we competed for the very first time at Glen Willows CDE in September. I was thrilled to complete the competition safely and with everyone still smiling. 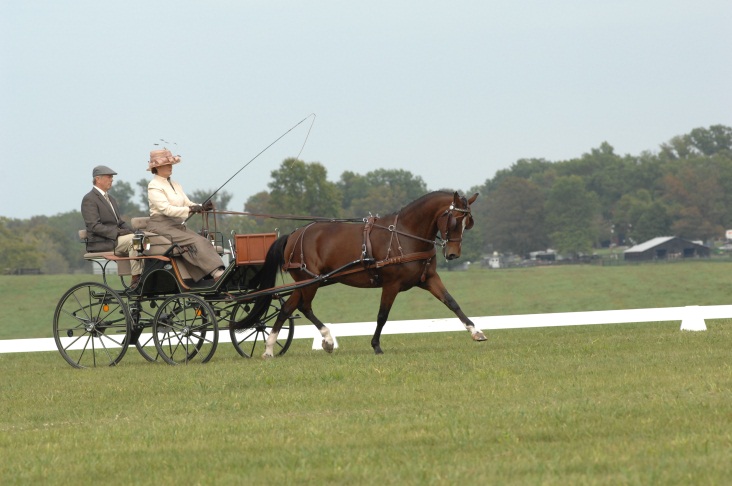 photo credit: Pic of You

By October, Fuego was ready to move up to Advanced level so we packed the trailer and drove to Kentucky for two competitions and USEF training with coach Michael Freund. The FEI dressage tests for Singles include canter movements and difficult transitions between collected and extended gaits. Fuego enjoys demonstrating his athletic ability so this challenging test flows easily for him. This was the first year for a new competition called Hermitage CDE in Louisville where Fuego won his class and earned the best Advanced score of the competition. I’m happy with the score, but know this talented pony can progress further and reach our goal of representing the USA in 2013 in Europe. We also trained with other drivers long listed with USEF to prepare for the Kentucky Classic, the National Pony Championship for the year. Drivers from across the country came together for this competition held in Lexington at the Kentucky Horse Park. We won the dressage but had a few bobbles during the marathon phase. Those seconds were costly in penalty scores, and we dropped to fourth place going into the final day. However, with a solid cones score we moved up to second place and earned USEF Reserve Champion for 2012. The busy competition year ends with the long drive home through the mountains with winter cold and a few snow flurries starting. I always look forward to getting home and spending time with the younger ponies and teaching my driving students. We will have a few months at home before the 2013 competition year starts in Florida that will give me just enough time to rest and plan another exciting year of driving these wonderful ponies.You can learn more about carriage driving from the American Driving Society, join the fun. http://www.americandrivingsociety.org/